Calculate Cost for your favorite dates 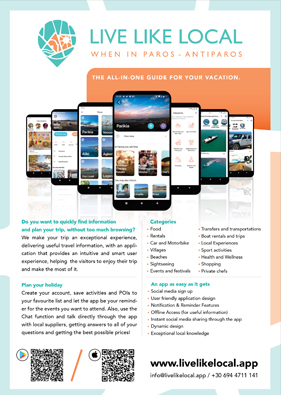 View the Reviews for the Villa!

The Poseidon Villa is located in a very nice place, near to the beach, with an exceptional view on the sea. We appreciated being welcome by Irene and George, always ready to help when required. The two level apartment is large and confortable. It might however be useful to include cleaning every 3 days in the rent... The swimming pool is beautiful, large and very clean. We really can recommend Poseidon Villa to spend quiet and peacefull holidays in this privileged accommodation! But you must know you really need to have a car to access to the place. Thank you for all! Monique, Tania and Sacha Bolognini

As you were on a ship deck! The cottages are built as terraced houses on a headland that seems to float in the sea, as it were detached from Paros Island. An unsurfaced road connects it to the main road linking Parikia with the airport and Aliki (the most convenient and quiet place to buy your meal or to go to a restaurant in the evening). The sunset view is amazing: Antiparos and a couple of small islands are just in front, and in the distance you will see Sifnos and Serifos. And all this just sitting on the private terrace (covered and equipped with a sunshade) of the villa. The apartments are generally on two levels, are comfortable and well equipped, even if they begin to look their age. For those who have motor problems: be cautious that the internal stairs are a bit narrow. The swimming pool is beautiful, in sunset view, and is very well maintained. Irene, the owner, very kind and hospitable, will surprise you almost every day with some greek delicacy. Two beaches, protected from wind and among the most beautiful of Paros, provided with one small restaurant each, can easily be reached with a walk (10 minutes the first, 20-30 minutes the second) through the maquis. An address to remember when traveling to Paros.

We have come here twice an swill return, happily. First, the location - Location and corresponding views are astounding and simply gorgeous. Perched on a cliff, you feel as though you are privy to a hidden world, a hidden paradise. This is an important point - the property is private and one really enjoys such intimacy. The pool is huge...

I contacted Nikos at Paros Booking back in 2013 for information on renting a villa during June of 2014, for our first trip to Paros. I wasn't sure if we could make reservations as early as we did, but I was planning a trip for people coming from separate locations and we wanted to make sure it was all taken care of well in advance. Nikos recommended Villa Poseidon, based on the size and needs of our family, and it was perfect. We started our trip in Mykonos, just in time for the Meltemi winds to disrupt the ferry services. Our first ferry to Paros was cancelled, so we rebooked on the SeaJet (which we hate because they are always late), and hoped for the best. That ferry ended up being over two hours late, then took an additional hour to arrive on Paros, and without mobile service, we were worried about arriving so late to the villa since we knew the owners were waiting for us. By the time the ferry arrived on Paros, the car rental agency had given away our car. Since they also sold ferry tickets there, and knew what ferry we were arriving on, I was surprised by this. They had to locate another car for us, which made us even later, but were very helpful and gave us explicit instructions on how to get to the villa. George, the villa owner, had previously given me excellent directions that included photographs, but now that it was dark I was worried about not finding it. We ended up passing the entrance, but found it again and were relieved to see the roads heading to the villa, while dirt, are much easier to navigate than the other islands we've visited, as they are very wide. What a relief! We ran into Irene on the way in, who was very very welcoming even though we were so late, and told us to go on in. George gave us the tour, and wow, we were going to be in for an amazing week. The pool is huge, and the villa was beautiful. I believe there are 8 units total, but every one of them faces the sea with an unbelievable view towards Antiparos and the water. The photos online did not do it justice, this was paradise. The sky was bright and clear, and for the first time in my life I could see the constellations. It was magnificent. We had a two-bedroom, two-bath unit that had an extra bed (and nightstand) in the downstairs alcove. The bedrooms and bathrooms are downstairs. The master bedroom has its own bathroom, and there is a door that leads to the pool and outdoor space from there, which made it very convenient. Upstairs is the kitchen/dining and living space, with a huge terrace, along with a ceiling fan and a screen to keep the bugs out of the villa, so you can keep the door open. The pool area is absolutely amazing. There is a shaded area, as well as several sunbeds, so you never had to wait for one. There is also a huge outdoor room with window seats that overlook Agia Irini and a ping pong table. You can either walk or drive down to the beach, and there are two, we preferred the one that's next to Paros Camping as it was less crowded and had a wonderful sandy spot under the trees. Of the beaches we visited on Paros, this was our favorite, as we felt like it was our own little slice of paradise - and there is a taverna there that had what was one of our favorite meals on Paros. George and Irene welcomed us like friends, and we had an absolutely wonderful stay. We spent 5 weeks in Greece this time, and Paros was our favorite part of our trip. Because we had arrived so late we didn't have time to stop for groceries - and much to our surprise they had stocked our refrigerator. Every morning Irene brought fresh bread around and left it in a bag on our door. A couple of nights before we left they had a dinner for the guests, with a huge spread of food that was fresh and delicious, and it was a truly memorable evening. This was our first of what I hope to be several return trips to Paros. One day on Mykonos there were 6 cruise ships in port - to go to Paros after that was a breath of fresh air. When the winds picked up, I woke up worried about the laundry I'd left out to dry, only to find that they'd gone around and added clips to all the laundry on the drying racks. Wow! The sunsets here were better than anywhere else we'd been, including Santorini. The booking process was also excellent - Nikos was very patient with me and gave us lots of advice regarding the island, as I had several questions with this being our first trip to Paros. He also offered to help us with a rental car, which I should have done through him after what happened with the one we rented! He knew exactly what we needed in a rental home, and he was right. It was perfect. A big thank you to everyone.

The fully detailed guide of Paros Island with all the necessary information for the picturesque villages, the marvelous beaches, many activities for all the family and recommended restaurants for the most demanding people is available only for the clients of Bookingparos.com

Book with us and you will receive a 20 page guide of Paros Island in pdf format.